Daniel Fry's description of Peppermint Flat captures the ambiguous image of the prostitute in Salem: He burnishes it up as a little glamorous, but the details reveal it as confined and constrained in awful ways.

The people who lived on Ferry Street were the gay ladies of that day. This was a legal profession at that time, and they often drove around in horse-drawn cabs, showing their fine clothes and seeing the city which was about the only way they had a chance of doing so.

Gleaned from newspaper pieces, which of course have their own silences and appeals to glamour or sensationalism, the tragic story of Pauline Phillips shows the confinement and constraint, and the apparent impossibility sometimes of getting out.

Phillips had come to Salem from Denver, Colorado. Newspaper reports give her age as about 24 (the 1900 census as 23), and as having an 8 year old daughter. She was born in May, 1877, in New York City, and grew up as Emma Reisner. If the ages are correct, she had been a teen-age mother, bearing her child at 15 or 16. She had been married to James McDogget and subsequently divorced. It's not certain whether James fathered the daughter. Between the divorce and young motherhood, she may have felt herself to be the source of some scandal - or others may have saddled her with disgrace.

At any rate, Phillips came to Salem around 1896, not yet 20 years old. She did not have her daughter. Even without any scandal or shame in Denver, it is not difficult to imagine a scenario where Reisner was fleeing abuse of one kind or another and sought to remake her life. She adopted the pseudonym, "Pauline Phillips," and must have sought work. Whether she first turned to prostitution or did so only after failing to find regular employment is unclear. But for whatever reasons, prostitution seemed best or the only escape. It likely paid more than regular work.

In time, despair and possibly addiction engulfed her. The paper reports

The woman had been very dissipated for some time. About two months ago she smashed a plate glass window on Commercial street while crazed by liquor. She was then committed to the asylum, but was released after six weeks treatment. She has been very despondent since, and has threatened to take her own life.

Another account added that she was in love with "a local sporting man, who did not reciprocate her affections." Perhaps this man toyed with her affections and seemed to offer a new escape. And she was separated from her daughter. Whether she was what we would today consider mentally ill, her life had all the ingredients for profound and desperate unhappiness.

Pauline Phllips, an occupant of a house of ill-fame at 142 Ferry Street committed suicide Thursday afternoon by drinking carbolic acid.

The poison was taken while the other occupants of the house were at supper in another room, about 5:30 p.m.

Drs. Shaw and Robertson were called in, but nothing could be done to save the woman’s life. 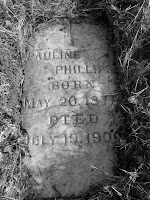 Phillips body was taken to the undertakers, Rigdon & Clough (the successor business still extant, and an Oregon150 history here) and an inquest confirmed the suicide. Hattie McGinnis made burial arrangements.

Madame McGinnis, in whose establishment the unfortunate woman ended her life, acting for “the fraternity” made all arrangements to give the poor girl a decent burial.

Phillips is buried in the Salem Pioneer Cemetery. Her gravestone, once standing, but now knocked over, is a little overgrown with grass. McGinnis apparently did indeed raise enough money for a proper headstone. The grave is not one of a pauper's, though today it is unremarked upon and neglected.

A couple of days after the funeral, a note thanking the Woman's Christian Temperance Union appeared in the paper:

CARD OF THANKS We take this means of extending our heartfelt thanks to the ladies of the W.C.T.U. for the kindness and courtesies extended on the occasion of the funeral of the late Pauline Phillips; we also wish to thank Rev. Dr. John Parsons for conducting the funeral services. MABEL RHODES MRS. HATTIE McGINNIS

Though we might think of the WCTU as temperance zealots, this notice points to one way that women collectively stood together against sexism. It was women banding together to fund a decent burial for Phillips, not the men who purchased sex. By placing social and political critique under "morality," temperance forces were able to be more active. The absent father, whether he was drunk in a saloon or visiting a prostitute, was presumably harming the lives of his children and wife. The WCTU also knew that there were limited ways for women to make a living. And, of course, the WCTU was also involved in agitating for women's suffrage. So the WCTU was not merely saying "no" to real pleasures that might be abused, but was aiding more progressive causes.

Note also the presence of a priest at the funeral. McGinnis is hardly shunned. The prostitution at Peppermint Flat and Hattie McGinnis' activities appear to be a largely accepted part of Salem society at this time, just as Fry had said.

A few days after the burial, the weekly Capital Journal made some effort to publish information about Phillips' relations.

The correct and maiden name of the dead woman was Emma Reisner, but she was the divorced wife of James McDogget...The woman’s parents reside at No. 3934 Winter street, Denver, Colorado....She had told her companions that she had a daughter eight years of age, who is probably with her grandparents.

It is not clear why this was published. Was it intended to shame the parents? We'll see if we can find out more about the Reisners and McDoggets.

In 1900 the whole of Marion county had a population of 27,713. Salem was mostly bounded by Mission on the south, Union on the North, and 17th on the east. There were pockets of houses to the north and south - but Salem was a small town, a little smaller than Monmouth-Independence is today.

Still, there was lots going on that we've forgot. Hattie McGinnis worked a seam between the licit and the illegal, between the accepted and the immoral. She exploited her workers and took care of them. Unfortunately, she wasn't able to help Phillips enough before Phillips decided to end it all.
Posted by Capital Taps at 2:30 PM