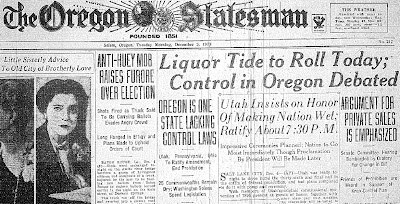 Beer lovers, it's your Patriotic Duty to celebrate the 76th anniversary of the repeal of Prohibition! Saturday is Repeal Day, December 5th, the date in 1933 the states and nation formally ratified the 21st Amendment. 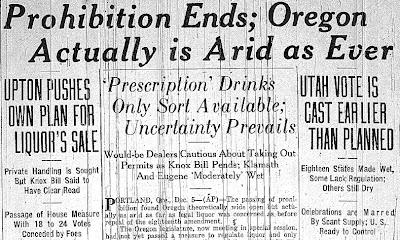 On the 6th, the Statesman reported

[Passage] found the federal government prepared to control the flow of liquor in wet states through a virtual dictatorship over the industry, and to protect the arid ones. Several of the 18 states where liquor could be sold immediately, however, were without regulations.

Repeal celebrations, however, found liquor supplies for immediate consumption restricted in some sections.

In a hurried effort to meet the demand and thereby thwart the bootlegger, the government today decided to allow large importations of American type bourbon and rye whiskies from Canada. It also planned to release for beverage purposes medicinal liquors held in bonded warehouses and customs houses.

Here in Oregon supply was definitely a problem, and the only reliable supply of booze seemed to be "medicinal" hootch.

The passing of prohibition found Oregon theoretically wide open but actually arid as far as legal liquor was concerned as before repeal of the eighteenth amendment.

The Oregon legislature, now meeting in special session, had not yet passed a measure to regulate liquor and only the restrictions imposed by municipalities were in force. The supply of legal liquor, however, was little if any larger than in pre-repeal days, being limited virtually throughout the state to "prescription liquor."

Most interesting was the problem of bootleggers, who had already built sophisticated warehousing, delivery, and accounting systems. The current three-tier system with the state controlling liquor and an inflexible system of producers, distributors, and retailers arose as the response to making bootleggers legit. The paper reported that

Speakeasies continued to do their average business in Portland, it was reported, as citizens wishing to buy anything more than 3.2 per-cent beer were unable to find any places of retail other than the drug stores where certain types of liquor, mostly whiskey, have been available since last August.

Oregon faces the problem of a well-organized group of bootleggers and racketeers and the only way to curb these individuals is to take the profit out of liquor, Senator Goss told members of the senate alcoholic traffic committee at a meeting Tuesday afternoon.

"When you take the bootlegger and racketeer out of the liquor business he will continue his criminal operations and eventually find himself in the penitentiary," Goss continued. "You cannot obtain adequate punishment for these men under any law which gives them an even break."

Over at the Weekly Brew, Jared's got a nice discussion of the three tier system. He's also got a nice post on the Holiday Ale Festival in Portland, which unquestionably has the most alluring beers for a toast. Closer to home, Beervana honored Venti's as a Certified Purveyor of an Honest Pint. Read more about it on the ventiblog.

So go toast the Constitution!
Posted by Capital Taps at 6:00 PM