Like T. A. Livesley, Louis Lachmund was a hops dealer with a large reach. He came out west for hops, became mayor, state Senator, and was President of the Capital Ice and Cold Storage Company for 20 years. Though Lachmund also ended up in a big house, unlike Livesley he didn't build it, and today there are no Salem landmarks associated with his name.

Lachmund first came into view here in the Statesman year-end review of 1902, published on January 1, 1903.

A better view comes from the potted biography in Oregon Voter, March 1, 1919:

An unusual combination of ardent enthusiasm and canny conservatism, an impetuous speaker who is slow to enter a conflict but once in it compresses positive convictions into a few thunderous exclamations, the meaning of which is not a whit obscured by their unconventional wording or picturesque delivery—such is the impression made by Salem's new senator. Louis Lachmund is a man of unusual success in his private undertakings and along with his business career has taken such an active part in public affairs that he brings to the legislature an experience which with his forceful personality is bound to make him an influential and effective member.

Born 49 years ago last Sunday in New York City; out of school when only twelve years old; a newsboy and office boy; bank clerk and bookkeeper until 19 and at 20 sent to the Pacific Coast on the responsible mission of opening a branch office in Puyallup, Washington, for a big hop brokerage firm — such was his start. In 1895, when 25 years old, he opened up a hop brokerage agency of his own in Salem, and about ten years later embarked in the hop growing business on his own account, soon adding fruit growing to his farming venture. He fought prohibition to the last ditch, but had seen the handwriting on the wall in time to center on fruit culture, and today operates 270 acres of his own land in producing and marketing prunes peaches, pears and English walnuts. He has 170 acres in prunes alone, being one of the large prune producers in the Pacific Northwest. While he has not entirely abandoned dealing in hops he now gives that business little attention.

When the fruit juice industry was first established Lachmund took an active part in encouraging and fostering it, and in connection with his extensive farming activities he also is manager of the Green Fruit Department of the Pheasant Northwest Products Co., whose plants in Salem should be visited by every member of the legislature who wants to be posted on how a new industry has been developed to the point that it affords a market for the specialized fruit and berry products of the Willamette Valley and is instrumental in extending their use into every part of the world, especially in the form of loganberry juice.

In local civic affairs Lachmund's career has been stormy but consistently for the industrial progress of Salem. He served as councilman and mayor and many controversies raged around his policies. He has been exceedingly active in the commercial club, is a Mason, an Elk (Past Exalted Ruler) and a Cherrian. He is married and has a home in Salem as well as on his large fruit farm in Mission Bottom.

According to Frank Mauldin, in his book, Sweet Mountain Water: The Story of Salem, Oregon's Struggle to Tap Mt. Jefferson Water and Protect the North Santiam River, in 1910 the City formed the Mountain Water Committee to explore alternatives to Willamette River water. They recommended buying the Salem Water Company and connecting to the Santiam River, but a change in administration torpedoed the effort. In 1911 Louis Lachmund took office as Mayor and in May vetoed the bond sale to buy the company. Since he would know that better water would make better beer, it's not easy to understand why he killed the project outright instead of trying to modify or otherwise improve it. It was not a popular decision.

In an editorial the day after the veto, the Statesman wrote

Mayor Lachmund wrote the word FAILURE in large letters across the title to his administration last evening, when he handed in his veto of the water ordinance, and put Salem in the position of standing before the whole state as a mossbank town, unwilling to take up the reasonable burdens of a vigorous and progressive city.

All efforts to get the mayor into conference with progressive and disinterested property owners who have staked their fortunes on the improvement of the city...were unavailing. His headquarters were in the back room of the cigar store and all who wanted to see him had to go there.

Lachmund did not remain Mayor very long. In the primary of 1912, Dr. B. L. Steeves was elected mayor outright, with 62% of the vote. As the incumbent, Lachmund got only 26%.

In part because of Lachmund, it took another quarter century to get clean water. In August 1935, the City purchased the water company and in October 1937 Santiam water from Stayton Island begin flowing in Salem taps.

Water wasn't his only controversy. Apparently hops contracts could be contentious and misunderstood, and Lachmund's business activities are visible in litigation and appellate court decisions. Perhaps hops futures were new and required litigation to define and settle. In a couple of cases, however, Lachmund looks more like a difficult businessman. This was the end of the gilded age, of course, and perhaps the controversies were more typical than exceptional.

Lachman's obituaries revise slightly some of the details in the Oregon Voter biography. Born in 1870 he joined Horst Brothers in 1889 and the next year was sent to Puyallup and then on to Yakima. In 1895 he was appointed the General Manager of Horst Bros west coast operations.

In Capital Taps' first visit to the Supreme Court, we see in Roehm v. Horst, 178 U.S. 1 (1900), that Horst Bros was a New York firm and was dissolved in 1896 upon the retirement of Paul R.G. Horst. The other brothers continued the business under the same name. It appears, then, that Paul R.G. Horst invested in a new firm, Horst Lachmund Company, headquartered in Salem. According to the Acts of the Legislature of West Virginia (1897), it was incorporated in 1896:

I suppose a Virginia corporation is something like "a Delaware corporation." The company was active all over the west coast, including California, and in 1897 the California Supreme Court (Brewer v. Horst-Lachmund. Co. (1900) 127 Cal. 643, 60 Pac. 418) found that telegraph communications could reliably establish a contract. Lachmund's firm claimed they did not and tried not to buy hops they'd agreed to buy in a telegraph exchange. (The case was significant enough to merit a footnote in the Cambridge History of Law in America!)

And in Lachmund v. Lope Sing, 54 Or 106, 111, 102 Pac 598 (1909), Lachmund's firm appears heartlessly to have refused delivery of hops that graded lower than the contract, and instead of paying a lesser price for the lesser hops, tried to foreclose on the hops ranch. The courts were not amused.

There's a couple of other appellate cases out there, and if CT has any lawyerly readers with an interest in history, perhaps you'll be able to tease out more significance than I. And if this many cases made it to higher courts, the lower courts must be full of Lachmund litigation!

The legal record, in any event, shows the reach and size of the hops business. It also shows the volatility of hops pricing and how easy it was for the movement in hops prices to make a futures contract, presumably agreed upon at first with fair market pricing, in time skew deeply to one side's advantage. (Hops derivatives and hops hedge fund weren't around yet!)

The Polk directories show Lachmund moving twice before 1917. His third house, into which he moved shortly before the 1917 directory was compiled, is still standing, though no longer at the original site of 925 Court street. The Court street address was in the fashionable neighborhood near the Capitol, called "piety hill" by some. A son of Abigail Scott Duniway had built the house.

Here's a view of the house in situ at 925 Court street, just in front of the Capitol. It sat in the footprint of today's fountain or slightly to the east of it. Over at SHINE they've got a nice little piece on the house and its moves. It was on the Willamette University campus and was the home of its President for a while. Today it is on State street near 25th. 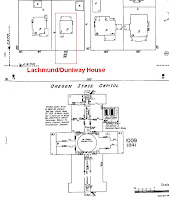 In this detail map of the original site, with Court street running through the middle and Summer and Capitol on the sides, you can see the original east-west orientation of the second Capitol, which when it was rebuilt after the 1935 fire rotated 90 degrees and became a north-south orientation. The centerline of the Capitol was also moved a little to the west to be in line with Summer street rather than with the alley between Summer and Capitol streets.

Later, Lachmund owned the big Spanish Colonial on Gaiety Hill, the Jarman house, right by the library. Here are three more views of it. (His obituaries called it "Fry Hill," after Daniel Fry's
residence, rather than Gaiety Hill.) Obviously, he was successful.

Lachmund died on October 15th, 1943, the same day Sick's Brewing Company announced the purchase of the Salem Brewing Association (the entity the Capital Brewery had become). Lachmund's obituaries graciously noted his public service, especially his work on the Parole Board and on integrating parolees back into society. He was buried in City View Cemetery.
Posted by Capital Taps at 8:00 PM