It's the Slavery: South Carolina's Secession 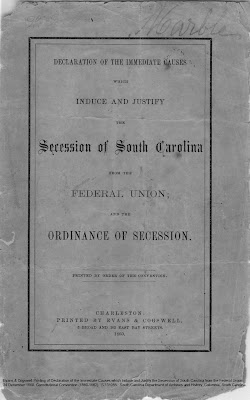 But in 1859 Oregon was only a free-ish state, and with the 1860 election of Abraham Lincoln, the whole country now looks at the Sesquicentennial of the Civil War.

On December 20th 150 years ago, the State of South Carolina was the first to secede from the Union. A few days later, on Christmas Eve, they composed their apologia, the "Declaration of the Immediate Causes." While we often hear about Secession and the Confederacy as a defense of State's Rights, South Carolina's "Declaration" makes clear that the only State's Right at issue was the right to hold slaves.

This historical amnesia is depressing; the antithesis of freedom for the state and slavery for the man is astonishing. We drink a pint to memory.

(bold added, but CAPS in original)

Declaration of the Immediate Causes Which Induce and Justify the Secession of South Carolina from the Federal Union.

The people of the State of South Carolina, in Convention assembled, on the 26th day of April, A.D. 1852, declared that the frequent violations of the Constitution of the United States, by the Federal Government, and its encroachments upon the reserved rights of the States, fully justified this State in then withdrawing from the Federal Union; but in deference to the opinions and wishes of the other slaveholding States, she forbore at that time to exercise this right. Since that time, these encroachments have continued to increase, and further forbearance ceases to be a virtue. And now the State of South Carolina having resumed her separate and equal place among nations, deems it due to herself, to the remaining United States of America, and to the nations of the world, that she should declare the immediate causes which have led to this act.

In the year 1765, that portion of the British Empire embracing Great Britain, undertook to make laws for the government of that portion composed of the thirteen American Colonies. A struggle for the right of self-government ensued, which resulted, on the 4th of July, 1776, in a Declaration, by the Colonies, "that they are, and of right ought to be, FREE AND INDEPENDENT STATES; and that, as free and independent States, they have full power to levy war, conclude peace, contract alliances, establish commerce, and to do all other acts and things which independent States may of right do." They further solemnly declared that whenever any "form of government becomes destructive of the ends for which it was established, it is the right of the people to alter or abolish it, and to institute a new government." Deeming the Government of Great Britain to have become destructive of these ends, they declared that the Colonies "are absolved from all allegiance to the British Crown, and that all political connection between them and the State of Great Britain is, and ought to be, totally dissolved."

More to the point is the relentless riffing on slavery and the brazen wish for freedom to hold the unfree. (Apologies for the longueur, but the stress on the freedom to hold slaves is remarkable.)

On the 23d May, 1788, South Carolina, by a Convention of her People, passed an Ordinance assenting to this Constitution, and afterwards altered her own Constitution, to conform herself to the obligations she had undertaken. Thus was established, by compact between the States, a Government with definite objects and powers, limited to the express words of the grant. This limitation left the whole remaining mass of power subject to the clause reserving it to the States or to the people, and rendered unnecessary any specification of reserved rights....We assert that fourteen of the States have deliberately refused, for years past, to fulfill their constitutional obligations, and we refer to their own Statutes for the proof.

The Constitution of the United States, in its fourth Article, provides as follows: "No person held to service or labor in one State, under the laws thereof, escaping into another, shall, in consequence of any law or regulation therein, be discharged from such service or labor, but shall be delivered up, on claim of the party to whom such service or labor may be due." This stipulation was so material to the compact, that without it that compact would not have been made. The greater number of the contracting parties held slaves, and they had previously evinced their estimate of the value of such a stipulation by making it a condition in the Ordinance for the government of the territory ceded by Virginia, which now composes the States north of the Ohio River. The same article of the Constitution stipulates also for rendition by the several States of fugitives from justice from the other States. The General Government, as the common agent, passed laws to carry into effect these stipulations of the States.

For many years these laws were executed. But an increasing hostility on the part of the non-slaveholding States to the institution of slavery, has led to a disregard of their obligations, and the laws of the General Government have ceased to effect the objects of the Constitution. The States of Maine, New Hampshire, Vermont, Massachusetts, Connecticut, Rhode Island, New York, Pennsylvania, Illinois, Indiana, Michigan, Wisconsin and Iowa, have enacted laws which either nullify the Acts of Congress or render useless any attempt to execute them. In many of these States the fugitive is discharged from service or labor claimed, and in none of them has the State Government complied with the stipulation made in the Constitution. The State of New Jersey, at an early day, passed a law in conformity with her constitutional obligation; but the current of anti-slavery feeling has led her more recently to enact laws which render inoperative the remedies provided by her own law and by the laws of Congress. In the State of New York even the right of transit for a slave has been denied by her tribunals; and the States of Ohio and Iowa have refused to surrender to justice fugitives charged with murder, and with inciting servile insurrection in the State of Virginia.

Thus the constituted compact has been deliberately broken and disregarded by the non-slaveholding States, and the consequence follows that South Carolina is released from her obligation. The ends for which the Constitution was framed are declared by itself to be "to form a more perfect union, establish justice, insure domestic tranquility, provide for the common defense, promote the general welfare, and secure the blessings of liberty to ourselves and our posterity." These ends it endeavored to accomplish by a Federal Government, in which each State was recognized as an equal, and had separate control over its own institutions. The right of property in slaves was recognized by giving to free persons distinct political rights, by giving them the right to represent, and burthening them with direct taxes for three-fifths of their slaves; by authorizing the importation of slaves for twenty years; and by stipulating for the rendition of fugitives from labor. We affirm that these ends for which this Government was instituted have been defeated, and the Government itself has been made destructive of them by the action of the non-slaveholding States. Those States have assume the right of deciding upon the propriety of our domestic institutions; and have denied the rights of property established in fifteen of the States and recognized by the Constitution; they have denounced as sinful the institution of slavery; they have permitted open establishment among them of societies, whose avowed object is to disturb the peace and to eloign the property of the citizens of other States. They have encouraged and assisted thousands of our slaves to leave their homes; and those who remain, have been incited by emissaries, books and pictures to servile insurrection. For twenty-five years this agitation has been steadily increasing, until it has now secured to its aid the power of the common Government.

Observing the forms of the Constitution, a sectional party has found within that Article establishing the Executive Department, the means of subverting the Constitution itself. A geographical line has been drawn across the Union, and all the States north of that line have united in the election of a man to the high office of President of the United States, whose opinions and purposes are hostile to slavery. He is to be entrusted with the administration of the common Government, because he has declared that that "Government cannot endure permanently half slave, half free," and that the public mind must rest in the belief that slavery is in the course of ultimate extinction. This sectional combination for the submersion of the Constitution, has been aided in some of the States by elevating to citizenship, persons who, by the supreme law of the land, are incapable of becoming citizens; and their votes have been used to inaugurate a new policy, hostile to the South, and destructive of its beliefs and safety.

On the 4th day of March next, this party will take possession of the Government. It has announced that the South shall be excluded from the common territory, that the judicial tribunals shall be made sectional, and that a war must be waged against slavery until it shall cease throughout the United States. The guaranties of the Constitution will then no longer exist; the equal rights of the States will be lost. The slaveholding States will no longer have the power of self-government, or self-protection, and the Federal Government will have become their enemy. Sectional interest and animosity will deepen the irritation, and all hope of remedy is rendered vain, by the fact that public opinion at the North has invested a great political error with the sanction of more erroneous religious belief. We, therefore, the People of South Carolina, by our delegates in Convention assembled, appealing to the Supreme Judge of the world for the rectitude of our intentions, have solemnly declared that the Union heretofore existing between this State and the other States of North America, is dissolved, and that the State of South Carolina has resumed her position among the nations of the world, as a separate and independent State; with full power to levy war, conclude peace, contract alliances, establish commerce, and to do all other acts and things which independent States may of right do.

And maybe things weren't so different here. Oregon was only free-ish. In Oregon's 1857 Constitution, section 35 in Article I, the "Bill of Rights," reads:

Free Negroes and Mulattoes-No free negro or mulatto, not residing in this state at the time of the adoption of this constitution shall come, reside, or be within this state, or hold any real estate, or make any contracts, or maintain any suit therein; and the legislative assembly shall provide by penal laws for the removal by public officers of all such negroes and mulattoes, and for their effectual exclusion from the state, and for the punishment of persons who shall bring them into the state, or employ or harbor them.

It wasn't until 1926 that citizens voted for repeal and to remove this from the Constitution.

(For more on the Civil War Sesquicentennial, see the New York Times "Disunion" blog, and The American Interest "The Long Recall" blog. Both are running daily real-time updates from 150 years ago. Many other newspapers and journals are also observing the Sesquicentennial. The Civil War's a big deal, and we'll check in on it occasionally.)
Posted by Capital Taps at 12:15 AM