It difficult to say just how supremely cool and wonderful and sad and touching are the Civil War letters of John G. Burggraf and the fact they are available online now. The Willamette University archives has just released them digitally.

As background, the archives note that

John G. Burggraf was born in Baden Baden, Germany in 1825. His family moved to the United States in 1835 and settled near Columbus, Ohio. In 1851 Burggraf married Eliza Cox. In 1856 they moved to Centralia, Illinois where they lived until 1883. The Burggraf family moved to Salem, Oregon in 1891. 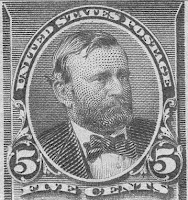 Burggraf volunteered soon after the Civil War began, joining the United States Army on October 19, 1861 in Salem, Illinois. He served in the 49th Illinois Infantry from December, 1861, when the unit was mustered in, until it was mustered out on September 9, 1865. During his time in the military he served as a carpenter, a mechanic and secretary to Col. Phineas Pease.

John's son Charles (born in 1866) was active as an architect in the mid-Valley, though few of his houses remain in Salem. The Burggraf-Webster house from 1895 stands on 13th just south of Mission and the Ashby-Durbin house from 1892 in the Court-Chemeketa Historic District. Other significant buildings are preserved especially in Albany and Corvallis. The National Register nomination for the Sherman County Courthouse contains more on Charles and his work.

Here's a letter from just after the battle at Ft. Donelson, an important early engagement for Ulysses S. Grant. 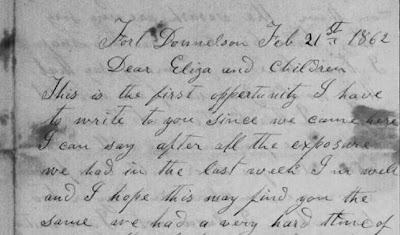 Presumably, English was Burggraf's second language and he frequently retains a German t where English uses d in cognate words. He did not appear here to use much punctuation - capitalization is infrequent, and we could see no commas, periods, or paragraphs. Spelling, too, is sometimes more phonetic than dictionary-approved. He was writing just after a battle and exposure to cold, and orthography was much more fluid then, than today (though chatspeak and textmessaging have reintroduced fluidity, and perhaps we are returning to historical norms of variety). "Sesesh" refers to Secessionists.

This is a tentative transcription only, and cannot pretend to be at all certain or final. (Hopefully we have not introduced our own scribal errors.)

Fort Donnelson Feb 21st 1862
Dear Eliza and Children
This is the first oppertunity I have to write to you since we came here I can say after all the exposure we had in the last week I am well and I hope this may find you the same we had a very hard time of it in the last week lying out in the woods for 4 days and 3 nights without any Shelter in rain and snow and mud up to our knees no one can disscribe the horrers of this battle field withe the pen The dead and woonted lying around for 6 or 7 miles by hunderts I went thrue the Town of Dover [?] is in the fort day before yesterday and went in some 20 or 30 houses and found in every one of them Dead or wounted and legs and arms lying round in the streets and dogs knoing on them The sesesh are very sory thay have bin caut in this snap I have heard a good many say that thay would join us if we wood let them I think the next time you will here from me we will be [?] where alec for thair will be a forward movement somewhere in a day or too but where I know not I am writing this letter on a fine desk I captured in Town and I brout it to our tent for the Col Pease to write when we want any thing I can find it all we have to doo is to take it it aught to be a terrer to the sesesh to see us come but I hop we will not have to go much further before thair will be a settlement made I will send a knife home which I captured of wich thay most all have to cary to kill us with but thay dit them not much good You can get more information from Mrs Pease of the battle from Col Peases letters and from Logan when I first saw him I had just got up in the morning to get breakfast and he eat breakfast with us you may beleafe me I was glad to see him here I don't know nothing more to write at present only my prayer is that if it the will of God we may all meet in that social family circle once mor and praise him for his kind care offer us and that we may life more for him then before and tell the children that thay must obay you and be good and obedient
no more at present your
Affectionate Husband
J.G. Burggraf

Go read them - and check out the other digital content! A big tip of the pint to the Archives!