Yerba Mate for Prohibition and Apocalypse: What Hath Hippies Wrought? 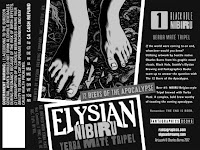 We guess it's a thing, Yerba Mate beer.

This month, as part of their 12 Beers of the Apocalypse, Elysian will release Nibiru, a Yerba Mate Tripel.

In a year-long run-up to the end of all time (according to the Mayan calendar), Elysian Brewing Company and Fantagraphics Books, both of Seattle, are planning a series of twelve beers, issued on the 21st of each month in 2012 and featuring the label artwork of Charles Burns. Taken from Burns’s weirdly apocalyptic work “Black Hole,” the labels will adorn Elysian’s “Twelve Beers of the Apocalypse,” featuring the creativity and unusual ingredients for which its brewing team is known. What twelve beers would you brew (and drink) if you knew they would be your last?

First up in January is NIBIRU, named for the mysterious planet X supposedly on a collision course toward Earth. The Elysian / Fantagraphics Nibiru will be a Belgian-style Tripel flavored with an infusion of yerba maté. Combining the tasty esters of Belgian yeast and the compelling tea-like flavors of the South American herb mixture, the beer will weigh in at around 7.6% alcohol by volume. A mixture of German Northern Brewer, Czech Saaz and American Amarillo hops round out the uniqueness of this first beer of the Apocalypse. Oddly enough there’s another apocalyptic-themed Nibiru out there: a super volcano currently burbling most dangerously beneath Yellowstone National Park. It too is scheduled to end life as we know it very very soon.

We think of Yerba Mate as a modern, hippie or new agey beverage. Curiously, the wikipedia entry on the history of Yerba Mate doesn't discuss its adoption in America.

But it turns out to have an older pedigree, implicated in fact in the temperance movement leading up to Prohibition.

It seems to have been introduced commercially to the US in 1899 or 1900 by the Yerba Mate Tea Company in Philadelphia. They printed a booklet about it.

By 1904, articles promoting Yerba Mate were being seeded as features in local papers. Here's one in the Capital Journal.

REFORMERS HAVE FOUND A PERFECT BEVERAGE 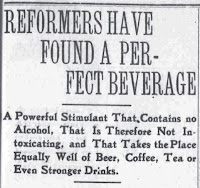 A Powerful Stimulant That Contains no Alcohol, That Is Therefore Not Intoxicating, and That Takes the Place Equally Well of Beer, Coffee, Tea or Even Stronger Drinks.

A beverage has been found that threatens to take the place of beer among the hard-working classes and to do away with tea, coffee, and other brain stimulants used by students, brain workers, nurses, and other persons who are required to remain alert and active during long periods.

This beverage is highly stimulatlng, non-alcoholic, non-intoxicating, and a nerve builder and nerve strengthener, instead of a destroyer as is the case with tea, alcohol, and coffee. It has already been introduced into England and will find its way to America as soon as its great merits become popularly known.

A drink such as this has been long been the dream of temperance reformers for the reason that it encourages itself owing to Its great stimulating and refreshing powers, and because the consumer quickly acquires tho "habit" and becomes to attached to the drink that he will prefer it to more substantial food and often go without his meals for the sake of it.

"Yerbe mate," or simply "mate" is the name for this wonderful drink and it has been used in one of its forms for some time In Paragua and Argentina. The beverage Is brewed from the dried leaves of the ilex, and can be prepared and sold In bottles to suit the particular taste of the consumer, or made at home like tea or coffee....
Plain mate is quite bitter, and, like beer, it is an acquired taste. The first sip gives a distinctly bitter taste, and the drinker sets down his glass with a wry face. Presently, as soon as the bitter effect wears off, the imbiber has a pleasant recollection of the sensation. By this time the powerful stimulating property of the drink has begun to work, and the drinker feels like taking another sip. Mate makes the user of it "feel good," makes him look with a brighter eye on the dark side of life, makes him forgot troubles for the moment, and, best of all, unlike beer, it makes him feel like working or doing something with his brain or hands instead of loafing or gossiping.

Chemists who have carefully analyzed mate say that it is perfectly harmless. It has only the smallest percentage caffeine and volatile oils, and it never leaves a bad after effect. Even when the drinker has a disordered stomach or bad nerves the consumption of mate is not followed by unpleasant feelings.

When the mate habit is acquired the drinker is apt to indulge himself freely, even when there is no need of stimulation. Like the alcohol drinker, he takes the beverage "for the effect." Sometimes he gets to be a regular mate drunkard, but wonderful to say, this beneficent drug has no strings, its only effect being of making the "drunkard" a busy, industrious and hopeful man, who gets more out of life for himself and his fellows than the ordinary man who depends on his own body for stimulation.

In a word mate cannot be "abused" any more than water, and there are few who take it in large quantities for the mere sake of the stimulation....

And on it drones enthusiastically, worthy of purity advocates like the Kelloggs (Will Keith and John Harvey) or Sylvester Graham.