The Bell of the "Bell Tower" Brothel

We believe that Ben Maxwell confused a brothel near the Bell Tower for a brothel named the "Bell Tower."

But we never imagined that the bell itself was still around! (If that information is out there, we just missed it.)

The plaque on the bell at the downtown fire station reads: 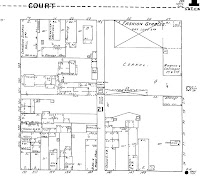 Here is the 1895 Sanborn map of the block bounded by State, Court, Liberty, and High. The tower was located in center of the alley directly behind the present Grand Theater - where the Fashion Stables are marked on the map.

Below is a detail showing the tower. The brothel was to the west, on the left in one of the houses marked "Chinese."

(See our previous post for more!)
Posted by Capital Taps at 11:45 PM