A Toast to Eugene Edmund Snyder, Historian of Early Oregon 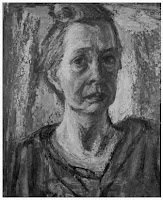 If you've been to the Hallie Ford Museum of Art, you'll probably have seen this visage, intently looking, resigned perhaps to age and a resolutely imperfect world.

Today's Oregonian contained the obituary for Eugene Edmund Snyder, who was Amanda Snyder's son. The obituary doesn't talk much about family, survivors or descendants, and hopefully this isn't evidence for a rift or for loneliness.

In any event, Eugene wrote many books of local history: Portland Names and Neighborhoods: Their Historic Origins; We Claimed this Land: Portland's Pioneer Settlers; Skidmore's Portland: His Fountain and its Sculptor; Early Portland: Stumptown Triumphant; and several others. He seemed to have a special relation with Binford and Mort, an important publisher of works on Oregon history,

He was raised in a rich stew of Oregon artists, and as an adult wrote sometimes on them.

He also wrote about Aurora, a utopian religious community in the northernmost portion of Marion County. Fittingly, his memorial service will be there on Saturday.

Meanwhile, down at the Conference Center is the 4th Annual Mayor's Oregon Artist Series. 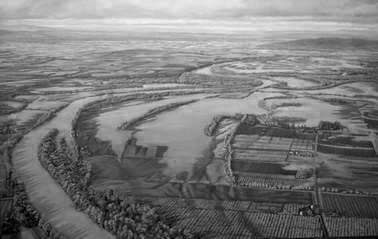 Floods are central to the Salem historical experience, whether the catastrophe of the 1861 flood, just two years after statehood, or the effects of dams and the infrastructure to control floods. This painting by April Waters hangs there. In many ways it is too lovely, the water an intense eye-candy blue, suggesting the fertility rather than destruction generated by flooding. The water and flooding imagery also underscores the notion of time's passage. (We may have more on the show later. Bonnie Hull has brief thoughts on the opening earlier this month.)

Go see some of the local and regional artists they'll be writing about in 50 or 100 years.
Posted by Capital Taps at 9:45 AM