That Alessandro's will be closing is sad news.

It is good to see a replacement business lined up, though. The Old Spaghetti Warehouse will be an apt replacement, though it represents a "cheezy" historicity rather than something more authentic and perhaps more interesting. In the 90s, about the same time Thompson's opened, the Willamette Brew Pub operated in the space, but for whatever reasons it did not succeed.

About the Alessandro's building, the Salem Downtown Register of Historic Places Nomination Form (7mb) is dismissive and calls it a missed opportunity:

This is a two-story commercial building. The date of construction may have been as early as 1870. The Sanborn maps show that Durbin's Livery was at this location in 1884; Minto & Lowe Livery in 1888; a hardware and stove shop in 1890; YMCA Rooms in 1895; and an electric painting company and photo shop in 1926. [Here's a photo of the front when Buren & Hamilton was there, in the very early 1900s, long before the remodeled facade; the caption misidentifies this building, in part because of the address change of 1904] Substantial changes have occurred to the building and the latest remodeling appears to have occurred in the 1990s. The current facade has brick veneer on the first one-and-one-half stories and is stucco covered above. Windows are arched and fixed. The building does not contribute to the character of the district in its current condition.

More interesting than the building, therefore, is the huge void just to the north of it. 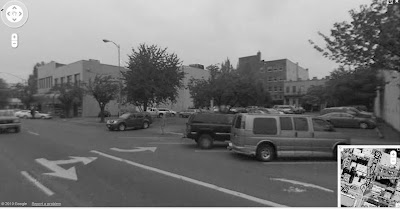 Here's what used to be there. This is a composite of photos from the 1938 opening of the new State Capitol. The fellows in white and boaters are Cherrians - much like Portland's Rosarians, whom we still see during the Rose Festival. 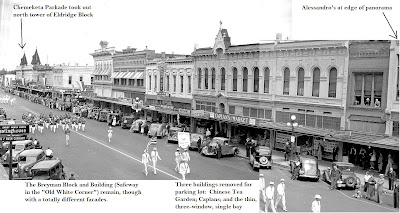 The parking lot sits on the footprint of three buildings. (Click to enlarge photo with notes.) The two Breyman buildings (here's the oldest one, the "White Corner") on the corner of Court and Commercial happily remain, though much remodeled.

We've been thinking about other buildings leveled for surface parking, and this may become a series of toasts to other lost glories.

A tip of the pint to Alessandro's and to the lost glories of downtown Salem.

(Photo composite: Here, and here. For another view of the lost buildings, which includes Alessandro's building, see here. All historic photos from the Salem Public Library Historic Photograph Collections. Streetview from Google.)
Posted by Capital Taps at 9:00 PM