After Oregon had gone dry, but before Prohibition went Constitutional, theater owner T.G. Bligh was busted for booze. In February 1917 agents confiscated seven cases of beer from his home, his hotel, and his theater.

Today we remember Bligh mainly as the man behind the recently demolished Capitol Theater.

But in the late Vaudeville and early movie eras, Bligh was an emperor of entertainment, and had a large chain of Salem theaters. It cannot surprise us he was might be involved in illicit beer! And it wasn't the only time the hotel was associated with Salem's seedy side.

Empty lots, unfortunately, commemorate most of the theaters today. 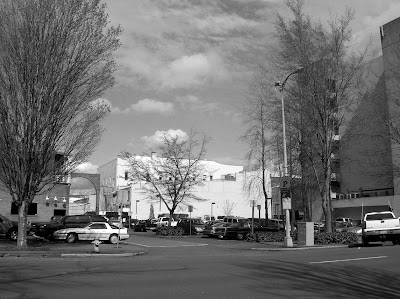 Facing State Street between Liberty and High, on either side of the alley running between the McGilchrist block and the Masonic building, are two parking lots.

In mid-century Salem, however, State Street offered a continuous line of buildings and a lively streetscape. 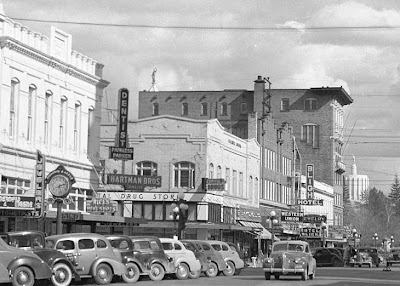 Here you can see (L to R) the clock in front of Pomeroy building, the Gray building, the gap for Liberty, the McGilchrist block, the Bligh Hotel, the State Hotel, the Masonic Building, and the Capitol dome in the distance. Notice the two-way traffic on State Street! (Centering the word "Bligh" over the "t" in "Hotel" makes the sign read "Blight" - funny!) 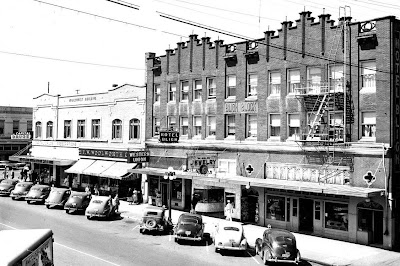 The Bligh Block started construction in 1910. On November 29th, a small news item noted that Bligh had placed a $20 gold piece among the bricks by the cornerstone. A thief had vandalized the bricks and taken the gold. 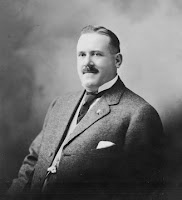 A 1927 account describes the many theaters of T.G. Bligh and says he

in 1908 opened the Star Theater in Salem. This was the first ten-cent show house in the city and had a seating capacity of one hundred and ninety-seven. In 1912* he established the Bligh Hotel, provided with sixty guest rooms, and in the same year opened the Bligh Theater, which contained five hundred seats. It was closed in 1927 and the Star Theater was sold in 1912. He also owned the Mascot Theater, with seating accommodations for two hundred and fifty persons, and the Bligh, formerly known as the Klinger** Grand Theater, provided with three hundred and fifty seats. He added the Liberty to his chain of theaters, and for six years was the owner of the house, which had five hundred seats. He was one of the foremost business men of the city and left the deep impress of his individuality upon the history of its development. In November, 1925, when fifty-four years of age, he was fatally injured in an automobile accident. His widow still makes her home in Salem.

It notes that the Capitol theater was originally known as the "New Bligh Capitol Theater."

According to the downtown historic district nomination form,

Following the death of T. G. Bligh, Frank D. Bligh took over the family hotel and theater business. In 1926 he built the Bligh Building [site of the restaurant La Capitale] and the adjoining (to the east) Capitol Theater of reinforced concrete.

Across the alley from the Bligh Block was another hotel in the Schreiber Block. 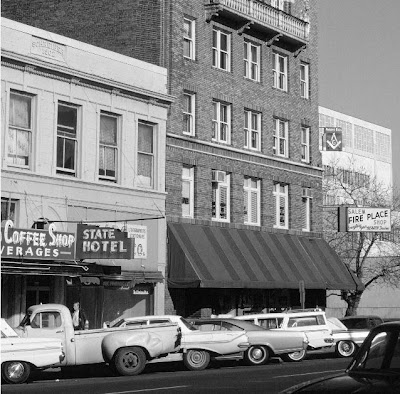 Information on it is harder to find. At the top of the building are the words "Schreiber, 1902" and we recall a 1908 note about a Schreiber saloon on State Street. The void is also two separate tax lots, and the photo of the fire (below) appears to show two buildings.

The Polk directories show August Schreiber operating a saloon from at least 1889, and on State Street from 1891. In the 1905 directory, when the Schreiber block appears for the first time, he also has a saloon in the building. It seems likely that August had been a successful operator and was able to finance his own building.

As for the hotels, details are few. Around 1905 "The Keith" Hotel appears next to the Schreiber block. We were not able to determine if it had a separate name for the building and it will take more digging to learn about this building. Ads for the Keith called out "furnished rooms" and a "European plan."

The State Hotel dates from much later than this period. 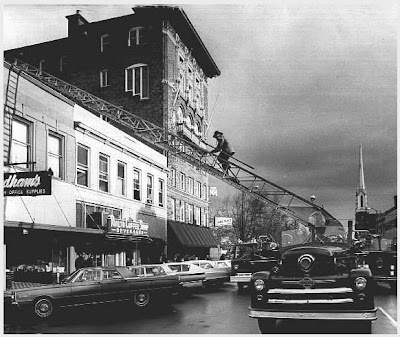 One online note suggests the Schreiber Building may have burned on December 6, 1966 - but the newspaper of the 7th and 8th doesn't seem to have an article on it, and we cannot confirm it.

The fire in the Bligh Hotel was front page news. It burned on Saturday, June 8, 1975. According to the June 9th Statesman, the first alarm was called in at 12:19am and not long after it was a full three-alarm blaze. Like many old hotels in Salem and elsewhere, the Bligh operated as a boarding house (or SRO) with 40 rental units. The rooms rented for about $2.75 a night. About 58 residents, whom the paper called "the transients or winos of Salem," escaped, but two died, Arnold "Smokey" Stover, age 48, and August "Auggie" Cico, age 49. Both were farm laborers and had lived there for several years.

The paper quoted another resident, "Okie," about his night:

I had beans and cornbread for supper Saturday after working in the broccoli fields all day. Then I went to bed about 8pm because I was tired. Didn't get drunk last night. Friday, but not last night.

Other businesses in the block were Transamerica Title Insurance, Steimonts Studio, and The Jewel Box jewelry store.

Within the week, investigators determined arson was the likely cause.

Today, all three lots remain vacant, generating fees from auto parking. After both fires, it was apparently not profitable to rebuild. 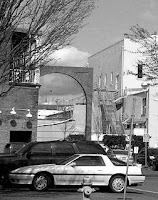 The arched flying "buttress" that appears behind the Roth Building (old Jonathan's space) cannot be part of the original Bligh Theater or sit in its old footprint as a faux-vestigial proscenium. On the north side of the Masonic Building, and across the alley from the Roth Building, the 1926 Sanborn shows a large second-hand furniture and appliance store constructed with "wood posts," and it is possible the buttress was actually to stabilize that building. Anyone know what it really is?

The Bligh family members are buried in City View cemetery. The monument reproduces Bligh's signature, presumably, and is one of our favorites.

The Schreibers are mostly buried in St. Barbara's cemetery.

* The 1911 Polk directory has an ad for the Bligh Hotel and several listings for businesses in the Bligh Block. It seems possible that the 1912 date of completion is errant, a year late.

** This may be a reference to a different business operated by Maurice Klinger or one of his children! Bits on Klinger here and here.
Posted by Capital Taps at 12:30 PM