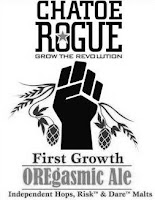 In search of Rogue's "World Class beer" and "Unique Thunder," the Capital Taps Expeditionary Forces* recently trekked out to American Bottom, just south of Independence, for some hop harvest action.

The fact that there's a tasting room on a working hop ranch is undeniably cool. Except for a few pockets of pre-prohibition vineyard land scattered around the state, the history of Oregon wine really starts in the 1970s. It's a baby here. Hops in Oregon, of course, solidly go back for more than a century.

At the same time, the operation rides on the coattails of a much larger enterprise. The thunder isn't all Potemkin village, of course, but it's more than a little bit of puffery, a courting display for the beery masses.

If you're already a member of the Rogue Nation, you'll love the farm. If you're not, but you don't mind a little bit of theater and pomp, you'll also enjoy yourself. And if you're not on board with Roguery, well, happily the craft beer industry is diverse and big enough you can easily move along to something more to your liking.

A couple of years ago Rogue leased 40-some acres from the Coleman family, the current owners of the Alluvial Hop farm, a much larger 290 acre commercial farm. The Rogue goal was to open a tasting room on the winery tasting room model, to develop and market a home-grown beer terroir, and to sponsor in-house some hops research and development. 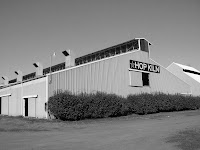 But more than anything is the impression of the commercial scale of the enterprise. It looks like Rogue is operating a giant hops farm! A hops kiln dominates the compound. 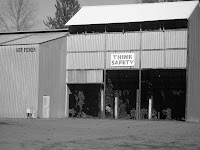 Just around the L in the compound, hops are being unloaded. Their piney, resinous fragrance wafts over the entire driveway and yard. Hop trucks rumbled in about every 5 or ten minutes, leaving the road dusted in hop cones and tendrils. 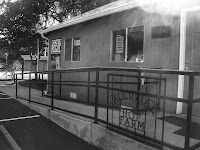 Nevertheless, the center of Roguery is surely the Chatoe. It looks like a trailer, set up inside with lots of Rogue ales and t-shirts. There's one tap. It was pouring Creek, clearly offered as a Kriek-a-like.

On the entry ramp a wrought Iron gate sign reminded visitors of the olden times. We weren't able to learn whether it was modern or vintage.

Across the driveway is a 1912 farm house, once used apparently as a children's dormitory for hop pickers' kids, and now operated as the Hop-n-Bed. (If you snicker at all the innuendo, you won't be alone.)

Rogue's "unique thunder" appears to invoke some minor-myth-making. In the spirit of the "jumping frog of Calaveras County," Roguery is all about the story.

The main story is the brand, the sometime slumming snobbery of the $11 six-pack: The chic socialist imagery of revolution and risk looks populist, but in fact the pricing is solidly capitalist, and more than a little elitist. It's like the winery that puts out a Chateau Moo-ton wine with a cow on the label: You have to know about Chateau Mouton Rothschild (itself a fine example of social climbing) to get the joke. Over at Beervana, Jeff has a more detailed "brand dissection."

This isn't the only switcheroo. Since Rogue is working cooperatively with the larger commercial farm, it is not difficult to imagine that the Coleman's Alluvial Farm activities take advantage of the contagion of Rogue glamor and indirectly pick up its branding. Equally, Rogue's farm gets to look bigger than it really is. The symbiosis is clever!

The history is also perhaps stretched. 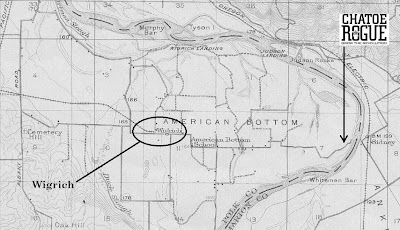 A slightly skeptical commenter on the Beer Northwest blog noted that the farm isn't actually on what might be considered the original "Wigrich terroir":

Wigrich Farms, a consolidation of Wiggins and Richardson**, was located about three miles west (towards the town of Independence) and was regarded as one of the largest hop farms; whereas Alluvial Farms was always at the end of Wigrich Road. Also in the American Bottom was Wells, Hunnicutt, Pattons, Pinkus, Turners, Hadleys, Haeners, Sloper, McLoughlin, Millhouser, Prather, Hop Fields.

Delimited boundaries always get expanded - just look at the history of Napa. It's a benign stretch, but a stretch nonetheless.

In the end, we wish there was more education and less direct marketing and merchandising. Like how about bowls of each hop variety that you can scoop, and touch, and smell? Instead of bloviating about Risk™ and Dare™ malts, how about bowls of them as well? And so on... Maybe this is at the Hop-n-Bed, which seems to have a museum component, but no person or signage directed us there.

We found the experience aimed too squarely at members of the Rogue Nation and not at people with an interest in beer generally. Maybe this is by design, essentially a members-only perk. Still, as a pioneering tasting room and ranch combo, we wish its goals were a little more ecumenical.

The story of Oregon hop farming is worth telling, and even if we didn't find thunder (or rockets and OREgasm) at the farm, the Rogue Farm makes a worthy contribution.

*Thanks to Agent RC for special help!

**The portmanteau "Wigrich" is especially interesting. The writer suggest "Wiggins" + "Richardson," but we could not confirm that easily. The Polk Directories, however, give a Wigan, Richardson & Co, based in the Bush-Breyman Block of Walter D. Pugh. The British company has a long history, going back to the 1700s, and had established an office in Salem apparently between 1905 and 1909. Here's a photo from the 1920s, when they had moved to the JC Penney's building (replaced in the 1940s by the Metropolitan building at 160 Liberty NE). We think the portmanteau, therefore, is Wigan + Richardson. (But clearly there's more research to be done!) While the hop farming was local, the parent companies were multi-national, and the hops a commodity. Wigrich here is far, far from terroir!
Posted by Capital Taps at 10:00 PM