Saturday is a great day for beer lovers! There are great beer festivals in Salem, Independence, and Corvallis this weekend. Ones in Independence and Salem even make a happy nod towards our hoppy history.

The Salem Beer and Cider Festival is at Mission Mill. It is $15, and includes a sampling glass and 5 tokens, additional drink tokens also $1.They'll have:

In honor of the fest, over at Poetry and Popular Culture, Professor Mike has a terrific set of riffs, hermeneutical and historical, on the 1911 Salem Beer acrostic and the "sale on ale in Salem." That's a dactylic treat!

The Independence Hop and Heritage Festival is also Saturday. They've got ghost tours, music - and beer. Rogue is a lead sponsor, and according to Brewpublic

The Rogue Shuttle will depart from the Festival Beer Garden in downtown Independence, Oregon every hour on the hour, and take festival attendees to the Micro Hopyard just six miles away.

(For more on the Rogue farm, see our expedition notes!) 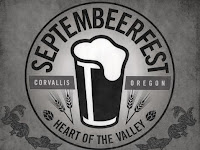 And if you can't get enough, and have a devoted designated driver, Septembeerfest is in Corvallis, at the Benton County Fairgrounds. Ninkasi, Block 15, and Calapooia headline. Admission is $10 and includes a pint glass and two drink tickets, additional drink tickets are $1.

So go taste something new this weekend!
Posted by Capital Taps at 10:00 PM

Labels: Beer and Brewing Culture, History, Other Bars, The Arts