Only slightly less important than the Superbowl is the Sesquicentennial - or Oregon150, as the marketers have helpfully clarified and branded. On February 14, 2009, Oregon will be 150 years old.

"Seski" the Sasquatch presides over the celebration, and Seski even has its own blog, Seski's Goings On. (Seski blogs like Russian is its mother tongue - no articles - some commentary on Russian fur traders???)

My name Seski. I was born in Oregon woods in 1859, same year as Oregon became state. Can you believe? Our birthdays, same. Now I have 150 birthday. We celebrate together. Adults have Pinot Noir and marionberry juice for kids. And cake. I like cake....

Throughout years, put hairy hand into many of Oregon’s accomplish. I help Blazers win 77’ champion. I cause Mount St. Helens erupt because I use it for hot tub. You enjoy microbrews? My invention. I like them.

Seski must be the Ur-Rogue, as Rogue Ales secured the exclusive rights to the official Sesquicentennial Ale and will release it on February 14th.

Over at Beervana Jeff Alworth argues that every local brewery should brew a sesquicentennial beer, and cites the Brew Site, who suggests that Deschutes is already on it with two beers from 100% Oregon ingredients. I hope Thompson's does one as the Capital's only craft brewery.

A hundred and fifty years ago, beer was wholly local. It was the pre-refrigeration era, so you had to get your beer fresh. Oregon already had a number of tiny breweries, and the number would jump to the dozens around the time of statehood. Mostly they were run by German immigrants who had come West with the pioneers to make their fortune. And of course, most of them are lost to the mists of time.

Posted by Capital Taps at 8:06 PM No comments:

As the country gears up for the all important Superbowl, the Oregon Department of Agriculture sent out a friendly reminder about the significance of hops to the Oregon economy. Starting with the bold clam that "Beer, often made with Oregon hops, [is] popular during Super Bowl," the release goes on to say:

The great flavor of beer can be traced back to agriculture in the Pacific Northwest. Washington and Oregon rank first and second respectively in U.S. production of hops- the key ingredient in beer- and are responsible for about 90 percent of the nation's hop production. Whether it is the big name brews consumed nationwide or the crafted beers brewed locally, party-goers can thank Northwest hop growers for making much of it possible.

"People don't realize that every time they pick up a can or bottle of beer, they may be consuming something from Oregon," says Laura Barton, an Oregon Department of Agriculture trade manager. "There is a good chance on Super Bowl Sunday, beer drinkers will be tasting a bit of Oregon."

Observing the size of the industry, the release says,

This past year, Oregon growers produced nearly 10 million pounds of hops at a value of nearly $38 million. Washington remains the clear national leader in hop production, accounting for about 63 million pounds in 2008.

The papers were full of hop harvest updates in the years around 1900 - yields & harvest data, prices, diseases & remedies. According to the Salem Online History

During the years when the breweries existed, the Willamette Valley was dotted with hop yards and dryers.... 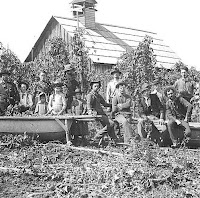 The increase in hop cultivation made for an influx of many migrant workers into the areas surrounding Salem. Nearby Independence even proclaimed itself the "Hop Center of the World" and held a festival and parade. In 1896 there were ten hop growers in Salem alone with many others up and down the Valley, and by 1902 the American Hop & Barley Company of London had an office in Salem. The buildings in the 100 and 200 blocks of Commercial Street housed many hop agencies, as did the Bush-Breyman Building and the Hirschberg Building at the Northeast corner of Commercial and State.

The Ladd and Bush Quarterly for July 1912 proclaimed "The best hop is grown in our river bottoms ... A choice Oregon hop is incomparable. It stands in a class of its own and always commands a premium in all the markets of the world". Although there were no breweries listed in the Salem City Directory during the years of prohibition, Salem still had 23 growers and dealers. The T. A. Livesley Company had extensive holdings in South Salem and, instead of selling locally they shipped to England, providing 1/30th of the international hop market.

Livesley is interesting because Salem is literally in his shadow: The tallest building in Salem is the Livesley building, and Livesley built Mahonia Hall, where the Governor lives today.

So when you crack open that cold, frosty brew on Superbowl Sunday, think about Salem, Oregon!

Brown's Town Lounge opened late last spring in a former sports bar space. They've been a great new addition for beer lovers. Over the summer they spear-headed the Ninkasi Salem invasion, and today still devote a full 5 taps to the brewery.

Brown's Town Lounge is in the McCormack Block Addition to the Reed Opera House (and here). E.P McCormack had purchased the opera house in 1885 and added the two-story addition in 1902. The addition housed a furniture store and Worth's Department store.

There might be no more historic place to tip a pint than Boon's Treasury. John D. Boon (1817-1864) had been a Methodist Minister, and was involved with the Willamette Mission. He built the store in 1860, after he'd been in Oregon for 15 years. One of his obituaries notes:

For the last twelve or thirteen years of his life he lived in North Salem, on what is known as Boon's Island, where he kept a country store. This was the favorite trading place of many an old fashoned dame, who could never be induced to leave his unpretending shop, for that of any of his more spruce and modern neighbors. From 1851 to September 1862, he was the Territorial and State Treasurer of Oregon, and kept the keys of her strong box with faithfulness and fidelity. During those long eleven years, no man ever whispered a doubt of his integrity, and at the expiration of the term he gave up the office with clear hands, and without an ill gotten penny. Peace to his ashes!

The owner, Judge John D. Boon, came to Oregon in 1845. He was also involved with the founding of Willamette University, the Pacific Telegraph Company and the Oregon-California Railroad. He was elected Territorial Treasurer in 1853 and was the first State Treasurer; it is possible that this store was used as the Treasury office.

Other uses have been as a dry goods store run by William Lincoln Wade from circa 1870 to the early 1900's, a part of the Larmer warehouse after 1910, and Karr's Tavern after 1935. Mr. Karr used marble from the Oregon State Capitol which burned in 1935 for part of his bar….The building occupies a historically important site near the junction of Broadway & High Streets. A historic marker across the street from the back of the building marks the location of where the first saw and grist mills were built on Mill Creek in 1841 and the settlement which became Salem began. The Boon Brick Store was placed on the Historic Register of Historic Places in 1975.

Boon's obituary and burial record at the Pioneer Cemetery. His gravestone.

Panoramic shot of Mill Creek area with Boon's building circa 1880s. Be sure to zoom in!

Boon's building about the same time or a little later.

But you really wanted to know about the beers! They just refreshed the tap list today:

Specials:
Dr. Who
Magnuson - A strong ale, malty & rich, specially brewed at Thompson's as a tribute to a special customer & friend.
Ninkasi Total Domination IPA
Posted by Capital Taps at 7:30 PM No comments: 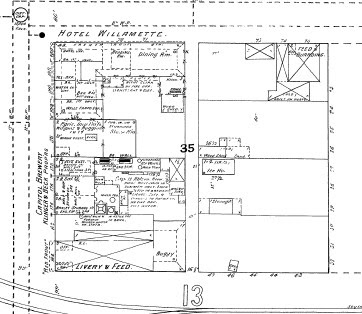 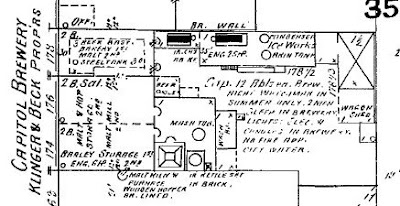 Over at Brewerygems there's a terrific history of the Salem Brewery Association, including the Capital Brewery. Jeff Alworth at Beervana has an excellent collection of notes on various aspects of regional brewing history.
Posted by Capital Taps at 2:04 PM No comments:

Venti's Cafe almost certainly has the best set of tap handles in the city. So it's appropriate to inaugurate the blog with a nod to Ventis. Thanks for caring about beer!

Venti's is also in an historic spot. Here's the R.M. Wade building. Around 1940 it was remodeled. The Pearce Building we know today hides the bones of a very old building!

About the R.M. Wade Company (still in business!), the Salem Online History says:

Robert M. Wade, overland immigrant to Oregon in 1850, founded R. M. Wade & Company in Salem in 1865. "Wades," as it was generally known, sold agricultural and household equipment from the two-story brick structure (constructed in 1869) at the corner of Commercial and Court streets, adjoining the England Block. The Wade & Company eventually specialized in farm equipment, carrying all the latest iron tools and equipment manufactured in the 1870s and 1880s and, eventually, tractors. The company also pioneered the use of sprinkler irrigation equipment known as "Wade Rain." By the early 1890s, when R.M. Wade established the company headquarters in Portland, Wades distributed its goods throughout the Willamette Valley and the Pacific Northwest. In 1902 the Salem branch of the business became "Wade-Pearce & Company."