The air in the hop fields this time of year is heavy with the scents of grassy citrus and pine resin! Sticky, sticky hops.

Back in the 1930s and 40s there was a Hops Fiesta in Independence. It died out, but with the resurgence of craft brewing and a growing demand for local hops, it's been revived.

The Hops and Heritage Festival takes place this weekend. We're late in getting to this, and perhaps still stumbling and foggy in the morning, and are therefore mostly reposting a note from last year. Still, don't miss out on the best fair around!

And if you go, be sure to stick your nose in some hops! Try some hop tea if they have it. Sample some fresh hop ale. Luxuriate in the hopitudinousness, as it doesn't last long.

And while you're there, take a moment to admire some of the old buildings. Apparently there's a new inventory being done of historic buildings!

Here are three historic views of downtown Indy from the intersection of C and Main Street. A lot of these buildings are still around. 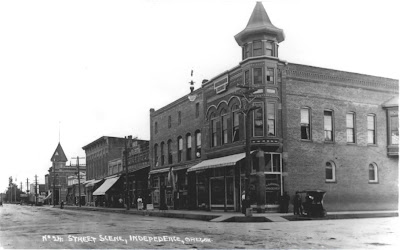 The building with a tower here and the single-story crenelated bank building on the other corner (below) were both built by James. S. Cooper:


J. S . Cooper was born in Missouri in 1841 and came to Oregon in 1863 and became a very prominent businessperson in Independence, establishing himself in the banking business. But in 1900 he gave up the banking business in favor of hop growing. Cooper was very politically active and was a delegate to the national Republican convention in 1888. In 1905 he represented Polk and Lincoln Counties in the legislature....J.S. Cooper died in Portland on July 5, 1921.

You may remember the Pink House Cafe. Cooper lived there from 1883 - 1913 and so the house is called the "James and Jennie Cooper House" in its very own National Register listing. 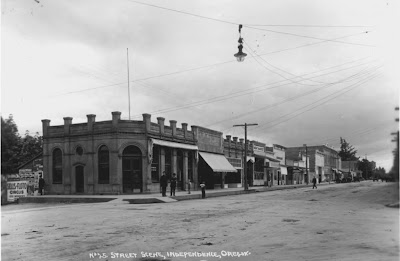 Pretty much you can't not run into an historic building in Indy!

And here's a view from across the river, looking to the site of present day Riverview Park and the amphitheater, and where the old ferry landing used to be located. 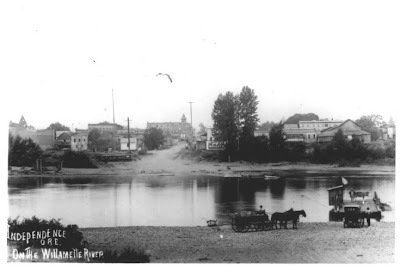 On the far left, you can also see the tower of the Independence National Bank, designed by Walter D. Pugh. The tower in the center is the Cooper block's. Both towers are also visible in the upper two photos.

As we have mentioned, we think the Hops and Heritage Festival might be the ideal fair, the right mix of old and new, agriculture and city, entertainment and history. Go check it out.

For more on historic Independence, see the National Register nominating forms and photos for the downtown historic district. (Both are big pdfs.) The four vintage images of downtown Indy are from the nominations. For more on Rogue's revival of Wigrich Ranch, see here and here.
Posted by Capital Taps at 8:30 AM No comments:

We raise a pint to working men and women. Hopefully you're having one yourself.
Posted by Capital Taps at 10:00 PM No comments: