Our favorite topic is in the water! It's a conspiracy! It's everywhere.

In a month "History on Tap: Farms, Fermentation and the Free Lunch" starts at Mission Mill and we can barely stand the excitement!

So you can imagine how interesting it was to see in the New York Times a review of "Beer Here: Brewing New York's History," an exhibit at the New York Historical Society that started on Friday.

It's almost like there's a master exhibit template you can buy from the Historical Society Guild. Just fill in the blanks with local names and details and you've got a show.

OK. Not really. But what it is, is a clear sign that what we might call the Bierzeitgeist is heavy just now. Beer is of the moment, and its history an increasingly serious - and popular! - topic for social history.


History on Tap examines the cultural and economic role of Oregon generally, and the Mid-Valley specifically, as one of the nation’s largest beer producers. Discover brewing methods, machinery and recipes for creating beers, as well as information on home brewing. Explore the importance of hops growing to the Willamette Valley’s economy, past and present. Uncover the tensions and interdependence that existed between the brewing industry, the temperance movement and women’s suffrage. Entrepreneurship is highlighted through “case histories” from brewing at Fort Vancouver in 1826, to Henry Saxer and Henry Weinhard in the 1840s and 1850s, to Salem’s Capital Brewery, to today’s craft brewing industry.

The Salem edition has announced an event schedule.

And a lecture series on Thursdays at 5:30pm ($3 members / $5 riffraff), McMenamins beer for sale:
If we have a quibble, and it's a small one, we'd like to see a little more on the Salem area - there's a significant, and not unexpected, Portland angle to much of this, and hopefully Salem's own beery history won't be stinted.

In any event, a big tip of the pint to Mission Mill for "History on Tap"!
Posted by Capital Taps at 3:00 PM No comments: 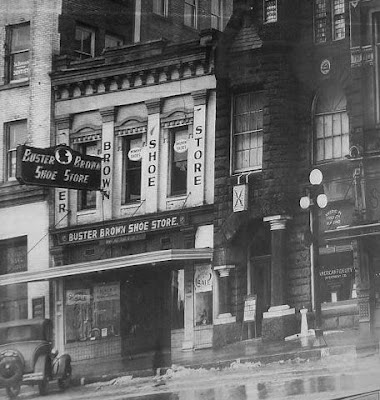 A friendly correspondent shared with us notes from Tuesday's talk on W.C. Knighton held at Deepwood.

The architecture started, as it must, with the Capital National Bank.

Plenty has been written about that building and its relation to a model in Philadelphia.* But what about the building next door?

At top is a detail from an image at the State Library. We haven't found much yet about the "Buster Brown" store, but it's gone now. It would have fit it with the other brick two-story storefronts along Commercial and State streets. 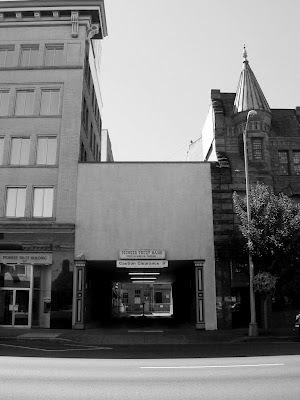 Today, it's gutted, a drive-through window for a bank and a surface parking lot in back.

(For more on W. C. Knighton see our notes here.)

* Apparently there was some thought that the attribution of the general facade plan to Frank Furness was uncertain.  But as far back as 1960, writing in the Journal of the Society of Architectural Historians Lee Nelson compared the two designs and concluded C.S. McNally "appropriated the design" from Furness.  (JSAH, Vol. 19, No. 2 [May, 1960], pp. 57-61).
Posted by Capital Taps at 8:00 PM 1 comment: