Star Spangled Beer: A Snapshot of Craft Brewing Circa 1987

Criticising the look into the crystal ball of 25 years ago is easy, of course. Still, take a moment to think about how our drinking habits have changed (or reverted, if you look back to pre-prohibition times)...

A “microbrewing” revolution is going on in America.

From California to Main, Georgia to Washington, small-scale “microbreweries” and “brewpubs” are reviving a cherished and historic American tradition – brewing specialty beers. (Microbreweries are small breweries producing approximately 15,000 barrels of beer or less per year…)

Today there are approximately 80 microbreweries and brewpubs in the U.S. and in Canada and about 15 more of these new breweries are planning to begin brewing in 1987. But these numbers are deceiving; although there are currently fewer than 100 microbreweries, the movement is growing rapidly and expanding into important markets in New York, San Francisco, Seattle, Washington, D.C., Boston, and Philadelphia. The future for these small scale breweries appears more than promising – it portends a renaissance in brewing and appreciation for fine beer all over America.

The microbrewers’ collective actions over the last 10 years have changed the course of brewing history in America.

With one exception, these microbrewing pioneers are enjoying a measure of success today. None is making big money yet, but they’re patient; the movement is only a decade old. Their fruits will come in the future when microbrewing becomes a way of life instead of just an exciting new trend.

Although there may be a limit on the number of microbreweries that will likely emerge (largely confined to urban areas of one-half million population or university towns), the number and type of brewpubs are almost unlimited.

A major city such as Boston, Atlanta, Washington or Chicago may support only one or two microbreweries, but could be the home of several brewpubs. Popular tourist states such as Massachusetts, North Carolina, Arizona, Washington and Oregon could support many brewpubs. But the largest potential for brewpubs is in populous states like California, Florida and New York.

According to the Oregon Brewers Guild,

There are currently 73 brewing companies, operating 96 brewing facilities in Oregon.

There are 30 breweries operating in Portland, more than any other city in the world.

The Portland metro area has 38 breweries, more than any other metro area in the US.

The Portland metro area is the largest craft brewing market in the US.

The national average for total craft beer consumption by volume is 4.0 percent.

Nationally, according to the Brewer's Association, there are 1,482 total US craft breweries. And they define a craft brewer as producing less than 2 million barrels! Widmer, Deschutes, and Full Sail are each much larger than 15,000 barrels by an order of magnitude more or less! Needless to say, the population centers that support craft beer are more diverse, widespread, and smaller than the book's author supposed. That's great to see.

Some of the profiles of individual breweries are amusing, so in another post we'll look at some - there were seven in Oregon back then! Full Sail doesn't exist yet.

For more, over at Beervana, Jeff Alworth has lots on the beer business and beeronomics as well as general beer history.
Posted by Capital Taps at 8:00 AM No comments:

No Pop Tarts: Summer in the City? Not this Year 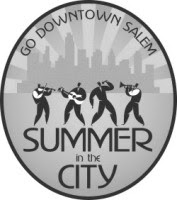 I'm disappointed about Summer in the City this year. Why, with the economy having tanked, they are charging non-trivial admission I just don't get. From a letter organizers sent out to merchants:

For the more adventuresome visit Hornitos Garden of Agave for tequila-tasting, coconut-bowling, a little bit of reggae by Rhythm Culture and find your place in the sun. American Idol's "Bikini Girl" Katrina Darrell will be on site for autographs and will be singing in her first performance since American Idol.

Neither the Art Fair nor the World Beat Festival offers bikini girls nor requires a $10+ admission. They ask for donations, but do not require paid admission. And they don't sex it up with American Idol Pop Tarts. (If they wanted something sexy, why not local burlesque performers?)

Since Summer in the City is one of the very few times when Salem residents can enjoy the full use of the downtown streets, it's sad to make the event a semi-private party contingent on an admission fee. All Salem residents should be able to enjoy the streets. It's fair to charge for beer, wine, food, and other goods and services. But to charge for the commons is cheap, shabby, and gouging.

Return Summer in the City to a Free Festival in the Street! Last year was glorious.

If you have to go, Venti's has a sweet beer offering. Jared's got the list and details.
Posted by Capital Taps at 9:15 AM 5 comments: