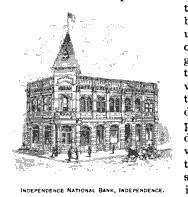 Over at The Weekly Brew, Jared's got a note about Guinness and the big 250. But right here we've got our own beery celebration: The Independence Hop & Heritage Festival, starting tomorrow and running through the weekend. Rogue offers a short bit on the history and events:

The "original" Hop Festival, also known as the Hop Fiesta, began in early 1930's. The festival grew out of the celebrations in the migrant camps at the hop fields. These celebrations marked the end of harvest. At last the celebrations were combined into one large party in Independence, which continued until the mid 1950's, missing only years when the US was most deeply involved in World War II.

The festival eventually stopped, for a number of reasons:

* Rebuilding of Germany included agreement to buy their product - they were a main producer of hops
* A blight attacked the hop vines and ruined crops
* Women left at home during war time developed a taste for a gentler beer using fewer hops, thus reducing demand

In 2001, Mayor McArdle decided to bring back the Hop and Heritage Festival, which opened with a huge attendance and patriotic display following September 11th.

The festival continues to grow each year, and we’re a big part of the celebration for 2009, with the Rogue beer garden, Rogue Nation sign ups, and hop farm tours.

The Festival includes a Ghost Walk and BBQ in the park on Friday night, with 40+ “ghost hosts,” where people are invited into homes, businesses, and restaurants to hear haunted stories.

On Saturday the Hop Festival continues with vendors, bands, a parade, tractor pull, and Xtreme Lawn Games – including crochet played with bowling balls and sledge hammers.

Last year Rogue was pouring a fresh hop tea - a non-alcoholic decoction of hops, water, and a little sugar. This was a great way to dial into the flavors and aromas of hops straight up. I hope they have it again!

For more on the Independence Bank and hops see this note on Walter Pugh.
Posted by Capital Taps at 7:50 PM No comments: 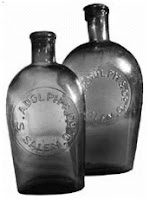 So if you want to honor some real history, step into Wild Pear and toast Samuel Adolph. (For more on the history of Sam Adolph and the Adolph Block.)
Posted by Capital Taps at 2:02 PM No comments:

The Taps at Venti's

At the Ventiblog, JR has a detailed series of posts going on what they've been pouring. As a snapshot of the Salem beer geek market, it's illuminating. JR divides the taps into four classes:

1. a crisp / clean lagers [Kölsch, Pilsner, Bock] or a thirst-quenching Golden or Pale Ales
2. an amber / red or brown ale, porter, or stout; typically, malty
3. an India Pale Ale
4. a Double IPA, an Imperial Stout, or a Strong Ale

and then lists for July and August the number of beers in each category.

By this count, over these two summer months, the hottest of the year, only 20% of the beer poured at Venti's has been in the first class of "crisp, clean, or thirst-quenching" beers. 25% have been in the second class of malty beers, 8% were IPAs, and an astonishing 48% were "double, imperial, or strong" ales.

During the peak of summer, about three-quarters of the beer at Venti's was winter beer from the second and fourth types!

Capital Taps thinks that's nuts. But I guess that's what the market demands. Still, it's a little disappointing that it wasn't until just this week that a witbier came on. At least it's sunny and warm just now!

But this is nitpicking. Thank you Venti's for the thought & care you put into beer.
Posted by Capital Taps at 11:43 AM 5 comments:

"Autumn Begins" - Beer, Football, and a Poem by James Wright

Saw Ichiro get his 2,000th hit this afternoon. He is the second fastest in the modern era to reach this milestone. Barring catastrophe, in the next few days he will be the first player to get 200 hits in 9 consecutive seasons.

The rains today coincided drearily with the start of football. Fall means football - grown men rush to crash and crush each other. Beavers and Ducks, Saxons and Vikings: Thus starts the long, slow arc of winter.

Jared's got a note about fall and winter beers he's looking forward to. I'm not ready to commit to them yet.

In the Shreve High football stadium,
I think of Polacks nursing long beers in Tiltonsville,
And gray faces of Negroes in the blast furnace at Benwood,
And the ruptured night watchman of Wheeling Steel,
Dreaming of heroes.

All the proud fathers are ashamed to go home.
Their women cluck like starved pullets,
Dying for love.

Therefore,
Their sons grow suicidally beautiful
At the beginning of October,
And gallop terribly against each other's bodies. 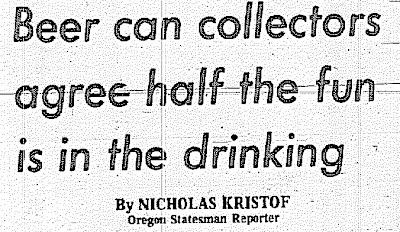 Sometimes when you're researching other matters, the darndest stuff shows up. I wasn't willing to spend too much time researching and verifying this, so maybe I'm off base here. But the New York Times columnist and human rights advocate Nicholas Kristof grew up in Yamhill, Oregon. I can't imagine that there are two journalists named Nicholas Kristof! So until someone tells me I'm wrong, I'm going to present this as an early article Kristof wrote before joining the Times in 1984. It is from August, 1979. 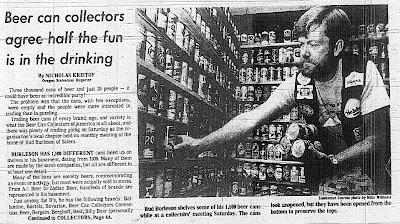 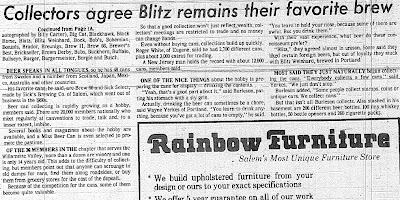 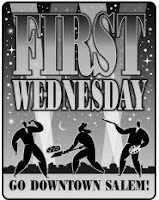 Traffic on two additional downtown blocks will be stopped tonight for First Wednesday back to school events, officials said.
The closures will be:

It's free! That's how Summer in the City should have been.

Go enjoy a fine summer's evening! Cheer on the kids! Drink some beer!
Posted by Capital Taps at 11:52 AM 3 comments:

The brewery profiles are pretty great. Here are excerpts from two. Both show the tremendous growth in craft beer over the last two decades, but one shows a virtually unchanged line of beers and the other a totally different line of beers. Across the breweries I know, the unchanged path is much rarer than a good measure of churn in product line.

Wikipedia lists Sierra Nevada's annual production now at about 700,000 barrels - a 100x increase in 20 years! Behind the contract-brewed Sam Adams brand, Sierra Nevada is the second largest craft brewing company in the US, and the sixth largest overall. Otherwise, their core beers are essentially unchanged.

(One of the other largely unchanged lineups is Anchor Steam, the oldest craft brewery by far.)

The Widmer brewery is located in a city that boasts more breweries (seven) than any other city in the United States. Four of the Portland breweries (Blitz-Weinhard, Portland [Mactarnihan's/Pyramid/Magic Hat], Columbia [Bridgeport] and Widmer) are located within a half mile of each other in the industrial northwest section of the city (the other three are brewpubs owned by Mike McMenamin.
Beers: Widmer Alt
Widmer Weizen
Widmer Oktoberfest
Widmer Fest
Widmer Maerzen
Widmer Bock

The Widmer lineup, by contrast, is totally different. The Craft Brewers Alliance, which holds both Redhook and Widmer, is the seventh largest brewer overall, sandwiched between Sierra Nevada and New Belgium/Fat Tire.

Full Sail didn't exist yet - or perhaps it was a gleam in somebody's eye.