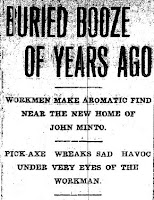 When we last saw John Minto, around 1895, he and Governor Lord were staggering home "pretty well lit," tailed by goody-two-shoes Oswald West.

About 15 years later, in the summer of 1909, after Minto had spent some time in Portland, workers excavating for his second home found evidence that a brewery had been there!

BURIED BOOZE OF YEARS AGO

PICK-AXE WREAKS SAD HAVOC UNDER VERY EYES OF THE WORKMAN

While workmen were clearing the ground on Mission street for the new home of Hon. John Minto, former postmaster of Portland, who, by the way, has come to Salem to live, and were te[a]ring down the old building that in bye gone days was used as a brewery, and in which the now celebrated Salem beer was first manufactured, an old bottle full of fine, good beer was unearthed. That they made good beer in those old days, not less than twenty years ago, was evidenced by the fact that this bottle was well preserved and had gained in quality since its manufacture. The bottle was unearthed by a pick-axe and was broken but the aroma that issued made the mouths of the men water like as they had never watered before. Lying in the cool bosom of the earth for so many years it bore evidence that hop juice was well made then.

Besides myriads of broken beer bottles, there seems to be millions of bricks and brick bats. That old house was first used as a brewery about forty years ago, and furnished the "joy juice" for the early fathers of old Salem. Inside the house there were several old U.S. Licenses for brewers of malt liquors. Many old timers will remember this historical building which now passes out of existence and lives only in the memory of man.

According to Ben Maxwell, writing in 1946, in 1866 Louis Westacott and a person named Miller

started a small brewery at the foot of Mission street, then a county road. Westacott died May 23, 1889....Westacott's brewery in 1870 represented an investment of $5000. Horse power was used to operate pumps, the malt mill, and other machinery. Wages for the year amounted to $700 and lager beer was produced to the value of $4500.

In this 1895 map, the house directly south of the brewery on Saginaw sits on what I believe was Minto's property (at least by 1909 it was), but the footprint is not that of his 1869 original home.

Today, the Meridian's parking lot sits on the site of the brewery. Around the corner, there are three standing houses associated with John Minto on the corner of Mission and Saginaw.

The addresses and building dates are somewhat confusing. 835/821 Saginaw in particular have not been used consistently, and a 1926 map suggests the second lot from the corner used both addresses at various times. Additionally, houses may have been moved. And more than one house may have been torn down on the site. It is not clear that the house built in 1909/10 is still standing: Two of the standing houses are associated with the 1920s, and the first with 1869.

As for the article's claim the Salem beer was first manufactured there, according to Maxwell in 1946, Samuel Adolph had been the first brewer in Salem, not Westacott, and started brewing in 1862 at Church and Trade. It may not be possible to settle the question definitively.

The idea of the old beer being sound is interesting. Jared has written about crazy hopping rates circa 1870, and the fact that after 20 or more years the beer was still aromatic (accounting for some newsy hyperbole, of course) suggests the beer here might also have been more highly hopped, malted, and alcoholic than the light industrial lagers against which craft brewers have defined themselves.

Update - here's an 1866 newspiece about Westacott's brewery.
Posted by Capital Taps at 1:00 PM