One hundred years ago Frederick Legg was an important architect in Salem. Today he's mostly forgotten. As it turns out, though, his buildings remain standing more often than those of any other historic architect in town.

Though Legg's designs aren't the most beautiful, elegant, or innovative, they are handsome, and it is possible that through solid engineering and practical design, his buildings have remained useful longer than more distinctive designs of his peers and predecessors. In any case, as measured by the quantity of his structures still standing, Legg stakes a claim as the most important historic architect in Salem. 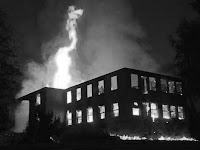 At least three of Legg's buildings have also burned. Just a week ago, Pierce Cottage at Fairview Training Center burned down. According to the University of Oregon photo archives, Frederick Legg (also Frederick Legge) designed it, and was also responsible for the design of Hoff, Holman, Kay, Kozer, Olcott, and Smith cottages.(Photo: Ruth Liao, Statesman-Journal)

Walter D. Pugh (the Grand Theater and old City Hall) designed the very first building at Fairview, LeBreton Hall. As the list suggests, next round of commissions was substantial and it went to Legg. Legg had been a junior partner in Pugh's firm, and it's not at present clear whether the commissions had gone to the firm for Legg to execute or if, perhaps, Legg took the client with him when he left.

According to Richard Ritz in his book, Architects of Oregon, Pugh and Legg practiced out of Portland between 1907-09 and dissolved the partnership in 1910. Legg's primary office continued to be in Portland until 1915, when he moved to Salem. The Polk directories give Legg's offices in the Murphy block (destroyed by fire; see note on it below). Once Oregon started licensing architects, Legg's was number 0056. (Pugh was never licensed and became a "contractor.")

At any rate, by 1910 Legg was established on his own, and in a January 1 puff piece in a substantial advertorial section published annually in the Statesman, the list of his buildings is substantial. Curiously, the Nomination Form for the Salem Downtown Historic District fails to attribute many of these buildings to Legg. It is possible his considerable contributions to Salem have been forgotten. 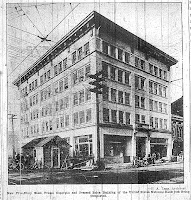 Mr. Fred A. Legg, known as "Salem's architect," is known throughout the Northwest as one of the most proficient workmen of his trade. He has been a resident of Salem, Oregon, from time to time, for twenty-five years, several years of which he and Mr. Pugh of this city were partners in business. Mr. Legg's unquestionable competency is evidenced in his works. The development of his plans and designs for the United States National Bank building [Pioneer Trust], of this city, has produced one of the most admirable buildings in the Capital City.

The architectural work on the Oregon State Mute School buildings was done by Mr. Legg. The plans of this group of buildings [photo: Wikipedia, building demolished in 1975], located about one mile north of Salem, has rendered them the most convenient of any of their kind in the Northwest.

The new Garfield school [and here], on the corner of Cottage and Marion streets, was also planned and designed by Mr. Legg. The patrons of this school claim the honor of having the most artistic public school in Marion county.

At the Oregon State Fair grounds the most commendable piece of work that attracts the attention of the visitor is the big Arcade at the entrance of the Administration building designed by Mr. Legg.

At the present time Mr. Legg is working on the plans and designs of the Union Bank & Trust Company building of Portland. The dimensions of this building are 50x100 feet and twelve stories high.

No architectural work is too great or too small for Mr. Legg, and if he undertakes to do any work for you, you are going to be satisfied.

Near the end of his life, incidental to a series on pioneers of the 1840s in the "Bits for Breakfast" Statesman column, on May 26, 1936, R. J. Hendricks surveyed Legg's career on the back end:

...Information has since reached this desk that to a long time and prominent resident of the capital city, C. C. Bozarth [pioneer of 1845] was a grand uncle on his father's side and a first uncle on the side of his mother.

He is Frederick Arthur Legge, the well known architect, more familiar to Salem old timers as Fred Legg, whose home is at 1499 State street....

William Thomas Legge married Christine Rachel John on July 3, 1859, and there came to this union one daughter and five sons, Frederick A. being one of the five, born in Multnomah county, Oregon, Nov 16, 1868.

He married Lulu Smith, daughter of Dr. Harrison Smith of Salem, on January 21, 1893.

They have a daughter, Margaret, who was married to Wallace C. Griffith on June 9, 1926, and they have a small daughter Margaret Claire, born in Salem April 7, 1927. Mr. Griffith, a teacher, has charge of CCC educational programs in the district just below the Oregon line, headquarters at Crescent City, Cal.

Also a son, Kenneth C. Legge, who married Velma Baker September 22, 1929. He is an architect and they now live in Portland, he being connected with PWA headquarters for Oregon, under C. C. Hockley.

Frederick A. Legge came to Salem 50 years ago next September and entered Willamette University, graduating after four years; then went to Philadelphia to study pharmacy.

From 1905 he owned an operated a drug store in Salem, on State street, for 16 years.

Since that time he has followed a profession of architect. Many fine buildings in this state testify to the fact that he has been busy, and efficient.

Also the Salem high school, and most of the other public buildings in Salem; those of the state school for the deaf, and about a dozen at the Fairview home, formerly called the state institution for the feeble minded. And many more.

Mr. Legge some months ago suffered severe physical injuries by a fall from a building. It was feared he might not recover, or would emerge a cripple.

But sheer grit and faithful persistency have brought him to a point near complete recovery, with prospect of full physical vigor very soon... 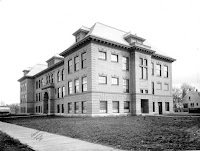 The list of additional buildings is impressive. The most interesting is the reference to "the Salem high school." It's not clear whether this refers to the old Salem high school built in 1905 or the new school now known as North Salem High School, completed in 1937, and in process of design and construction in May 1936. Less likely, Parrish Middle School was completed in 1924.

The old school's massing is very similar to the buildings at Fairview, and some accounts have associated it with Walter D. Pugh. Since the building lacks Pugh's signature towers and more resembles the Fairview buildings, it is reasonable to associate the design with Legg, perhaps executed under Pugh's supervision. At the same time, with the new high school in progress at the time of the article, Hendricks article is ambiguous, and we cannot rule out the newer school.

Several school buildings are securely identified with Legg. Lausanne Hall is the most distinctive. Others are more generic and gave rise to templates. The original plan of Englewood is almost exactly like Garfield. Highland and Richmond are quite handsome, and resemble more of the two- and three-story commercial buildings downtown. Clusters of the schools were clearly built at the same time and from the same basic plan.

The list of Legg's commercial buildings is also impressive. The Willis building and Stiff Furniture Company is the current home of the Book Bin at 450 Court St. NE. In 1936 the Hamilton Furniture store occupied 340 Court St. NE, the current location of Sid's Home Furnishings. The kinship between 450 Court and 340 Court is unmistakable. The Roth Grocery building was the former home of Jonathan's Long Bar at 120 Liberty Rd. NE. It was built in 1916.

Other commercial buildings identified with Legg that are included in the Nomination form include the Boise Building at 217 State St.; the Vick Building at 525 Trade St. SE; and the Farrar Building at 351-367 State St. Again there are stylistic commonalities.

Although Hendricks associates the White Corner with Legg, it, also known at the Breyman Block, was an old building originating in 1874, and it is difficult to place it on a reasonable timeline with Legg. The two buildings (here and here) were remodeled in the late 1940s, after Legg had died. It's not clear what this means.

Legg also designed residences. At least two are known. He is responsible for the John Minto bungalow of 1922 and the Cusick mansion of 1911.

His own home at 1499 State St. was demolished for a medical clinic.

After his death, his buildings were were no stranger to fire. The Salem Bank of Commerce, also known as the Guardian building, burned in 1947. The Murphy block, home to McMahan's Furniture, and earlier where Legg had his offices, burned in 2006. And, of course, Pierce cottage just burned.

Legg's reputation has been neglected - if not exactly "burned," too. As this list shows, there are tons of handsome, if not quite first-rate, buildings of his remaining, but few of them are called out as designed by Legg. As I think about Legg's buildings, I think especially of his rooflines, cornices, and in general the edges of his buildings. I like the way his buildings meet the air and sky, and meet other buildings. Perhaps in another note we can touch more on his style - or perhaps readers with shrewder eyes and a better sense of architectural history can comment on Legg's style and favorite moves.

Even if his style is not first-rate like that of Knighton or Lawrence, surely it is the kind of second-rate that is never cheap and often with time wears better than the flourishes of a more original mind. There are so many block faces in downtown with a Legg on it! Legg deserves to be remembered better than through fire and loss! Tip your next pint to Frederick Legg and his legacy!
Posted by Capital Taps at 6:00 PM