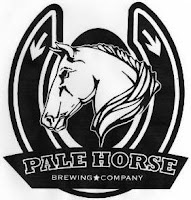 CT: What's your brewing background? Are you a home brewer? Or have you been brewing commercially before?

My brewing background started about 7 years ago, when I looked up at a shelf at a local variety store, and beheld a Mr. Beer Kit looking back at me. I took the kit home and the rest is history, my relationship with brewing beer has been evolving ever since. I started out home brewing and here I am trying to kick start a micro- brewery.

What are your principal brews, and what are your stylistic aims and preferences? What beers and brewers do you admire most?

Right now we have only two brews, HILLBILLY BLONDE (blonde ale style), and PALE HORSE STOUT (Irish Style Stout). I really don’t have any stylistic aims or preferences, we are in fact currently doing research into what the beer drinking public wants, and we’ll go from there. My own taste preferences tend to be the slightly less hoppy and bitter styles. I suppose this kind of goes against the thinking of those who think a craft beer ought to make your face pucker as you drink it. I do think the brewery’s third beer is probably leaning towards being a Porter. For those who want the more hoppier, and stronger beer we’ll probably be adding a IPA not too far in the distant future.

The brewers at the Pelican at Pacific City are the guys I have my bar set to. The superb quality of the beer they turn out consistently is the goal of our brewery. The Kiwanda Cream, and Tsunami Stout ales they brew are two great ales.

What are your plans for the next year or two?

For the next several years we’ll be trying to do the all the necessary thing all new businesses have to achieve to stay afloat; continually improve product, increase sales, and become a solid member of the Salem/Keizer community (which is the real motivation behind my Wife and I starting the brewery).

Where can people drink your beer?

People can find our beer at The Stone Front Tavern, Silver Inn, Big Shots Bar and Broiler, and Jammers. The list I’m happy to say is about to swell from establishments who are going take on our beer. Around the latter part of May or the first part of June our beer will also become available at many of the Salem/Keizer grocery stores.

The Pelican just went crazy at the Australian International Beer Awards. A month ago they sent 10 beers and won 10 awards. A brewer could hardly find a better model!

This is great news that the beer will be bottled and available locally. And I love the community-mindedness!

Thanks, Dennis, for taking the time to chat with Capital Taps!